State Senator John Flanagan announced Thursday he will host a series of public hearings throughout the state to review the effectiveness of recent state education reforms.

Mr. Flanagan (R-East Northport), who chairs the senate’s Standing Committee on Education, said the first hearing will take place on Long Island in September. His office said Friday dates and locations of the hearings are being finalized.

This past school year, English and math state assessments included elements of the Common Core State Standards Initiative. The common core standards are a new set of national benchmarks to help public school students master language arts and mathematics. It requires instructors to teach more non-fiction and rigorous math to students at a younger age.

The results of the new assessments are also tied to the state-mandated annual professional performance review plans, known as APPR. The teacher evaluation requirement originated in 2010 after New York was awarded a grant of nearly $700 million under the federal Race to the Top program. For school districts to qualify for part of the grant, the state required them each to implement their own APPR program this year.

While the state Department of Education has claimed implementation of common core aims to better prepare students for college and careers, many parents and educators have criticized the move because they believe teachers are being forced to abandon true learning for “teaching to the test.”

In addition to discussing state assessments and common core standards, the hearings will also focus on reforms implemented by the New York State Board of Regents. In 2010, the Board of Regents released policies designed to prepare students for college and 21st century careers, close the achievement gap and instill a lifelong love of learning in children Regents Reform Agenda, according to a press release issued by Mr. Flanagan’s office.

“As these reforms are implemented by the Board of Regents, questions and concerns continue to be raised about the impact these changes will have on students throughout the state,” the press release states. “While the reforms were initiated by the Board of Regents, it is critical to Senator Flanagan and the Education Committee that the state review the new policies and maintain an open dialogue about the future of state education policy.”

Mr. Flanagan said in a press release the hearings will focus on finding out “which policies are working well and which ones may need improving.”

“These hearings will provide the public with a thorough examination of current state education policies and the impact on our students,” he said. “This timely discussion will give parents the information they need and deserve and move the state education system forward in a positive direction for the benefit of our students.” 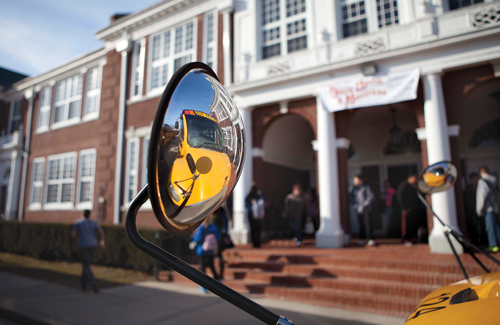 Several school districts on the North Fork will offer propositions along with their budgets this Tuesday, May 21, when...

Aidan Walker of Southold has earned a place on the fall semester dean’s list at the University of Notre...