The four winners of the 16th annual Sound to Bay 10K and 5K on Sunday morning faced some obstacles. Not only didn’t they know exactly who they would be racing against, but they didn’t even know the course they would be running on.

Something is to be said for familiarity with a race course. It’s helpful for a runner to know the twists and turns of a course, where the hills are, and what side of the road is the best to run on.

Yet, despite being newcomers to the event, they managed, with the aid of a well-marked course, to find themselves first to the finish line.

“I went into the race not knowing the course at all,” said Matt Gladysz, 17, of Wading River, who won the five-kilometer race. “I just followed the biker,” who led the runners along the route.

For Heather Wright there was added mystery. The Westhampton woman, who will celebrate her 41st birthday on Sept. 1, is in training for next month’s Hamptons Half-Marathon. On Saturday she handled a 12-mile training run.

Wright said she didn’t know herself what to expect on Sunday since she had never run such a long distance the day preceding a race before. Well, she didn’t do badly at all, taking first place in the women’s 10K race in 41 minutes 12 seconds.

“I felt good,” she said after completing the race that started at Iron Pier Beach in Northville and concluded at South Jamesport Beach. “I was waiting for it to fall apart, but it didn’t.”

Wright, who said she is more suited to the half-marathon distance of 13.1 miles, said she held her pace — 6:38 per mile — and did not worry about what was happening around her. She said she took the lead at the three-mile mark and felt strong.

“It was a great crowd and great weather,” she said. “The weather helped. The sun was in your face the whole time so it was hot, but no humidity.”

The weather was a little deceptive. A morning chill wore off as the sun continued to rise in the sky after the 9 a.m. start to both races, bathing the runners in brilliant sunshine.

Wright was followed to the finish line by one of her running partners, Laura Brown of Westhampton Beach, who was third in 42:07, behind the runner-up, Amy Constant of Miller Place (41:48). Nicole Cronin of Riverhead was fourth in 42:17, and Alyssa Simon of Emmaus, Penn., was fifth in 42:51. Indira Schwarting of Southold was eighth in 47:43.

For Kevin Harvey of Sag Harbor, who is also training for the Hamptons Half-Marathon, the race brought him encouragement to go with a victory.

The 22-year-old Harvey, a miler who ran for Fordham University, said he went faster as the race progressed and finished strong. Proceeding at a mile pace of 5:20 for a winning time of 33:09, Harvey broke the tape well ahead of the next finisher, Tim Steiskal of Brookhaven (36:36).

“I felt pretty confident the whole time,” said Harvey, a member of the Gubbins Distance Project running team. He added, “I stayed relaxed as long as I could.”

Harvey, who ran 1,600 meters in 4:11 two years ago, was happy with his time Sunday, but he has his sights set on an even more impressive achievement: He wants to break four minutes in the mile.

Gladysz is to start “Hell Week” Monday when he and his teammates on the Shoreham-Wading River High School boys cross-country team begin preseason practice. But Gladysz got a head start with his winning run in the 5K. He was clocked in 16:39.

“I have my first [cross-country] race in a week and a half, and I just wanted to see where I was at,” he said. “I feel really good. It’s going to be a great season.”

Gladysz said he took the lead for good about a quarter of a mile into the race and pushed the pace.

Richard Ackitelli of Wading River was ninth in 20:48.

Tara Farrell, 35, of East Quogue was the first female 5K finisher in 18:55. She didn’t sound impressed by her time afterward.

Farrell said she was motivated by a desire to turn in a good time “because this summer I feel I haven’t really run as fast as I usually do.”

The conditions were good for running, and it wasn’t just the weather that helped.

“Everyone was cheering me on,” Gladysz said. “It was really positive and it just made me want to go faster.” Eliud Ngetich smiled when a reporter joked that his participation in the 40th annual Shelter Island 10K Run Saturday... Kenya-born Linus Kiplagat literally ran away with the 39th annual Shelter Island 10K race, finishing ahead of his countryman... More than 250 runners turned out Sunday morning for the 19th annual Jamesport Sound to Bay 10K and 5K,... 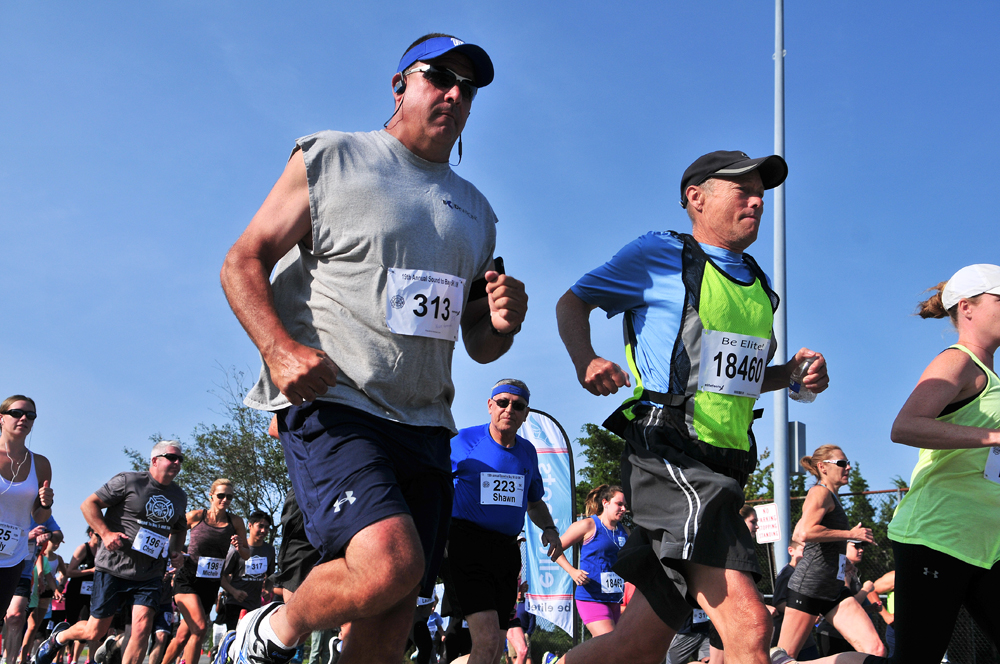