The New Suffolk school board plans to hire Christopher Gallagher as the district’s new superintendent, The Suffolk Times has learned.

Dr. Gallagher, who retired in 2008 after serving as Southold School District’s superintendent for eight years, said in an interview that he’ll be meeting with parents March 26 and is looking forward to working with teachers again.

“In my view, improving the teaching-learning experience never stops, whether you’re fresh out of college or have 30 years under your belt,” he said. “There’s always ways to improve. I find that very rewarding.”

Dr. Gallagher, a Southold resident who worked in the Smithtown Central School District for about 15 years before becoming superintendent in Southold, will replace Michael Comanda, who resigned March 20.

School board president Tony Dill said the tiny one-school district went about finding a replacement through word-of-mouth, which he said is the same way New Suffolk has hired previous superintendents.

“Everyone is really charged up now — kids are making decorations for [Thursday’s] reception,” Mr. Dill said. “What got us really excited is [that] his personal interests are aligned with ours in terms of moving the school forward.”

Mr. Dill said he and the rest of the school board have a lot of respect for the work, both financial and academic, Dr. Gallagher did for Southold. He credited Mr. Gallagher with doing some “heavy lifting” that later helped David Gamberg, his replacement in Southold.

“Chris, very quietly and without a lot of fanfare, went in and did what needed to be done,” Mr. Dill said. “For a small district like us, it’s an incredible opportunity because we can’t normally attract those qualified, especially since it’s a part-time position.”

Mr. Dill said he believes Dr. Gallagher will be able to present a draft budget at the regular April 16 school board meeting.

In addition to working with teachers and other staff, Dr. Gallagher must find a way to close a projected $160,000 budget gap for 2015-16 related to tenured teacher Martha Kennelly’s decision to return to the district from a special assignment.

Ms. Kennelly, who’s been assigned to draft Common Core-aligned curriculum, old the school board during a special meeting last Tuesday that the elementary school district could forgo having to hire a superintendent — and thus save money — by moving her into that role since she’s certified as an administrator.

The school board didn’t discuss Ms. Kennelly’s suggestion during the meeting and has since scheduled an April 6 special meeting to hire its new superintendent. 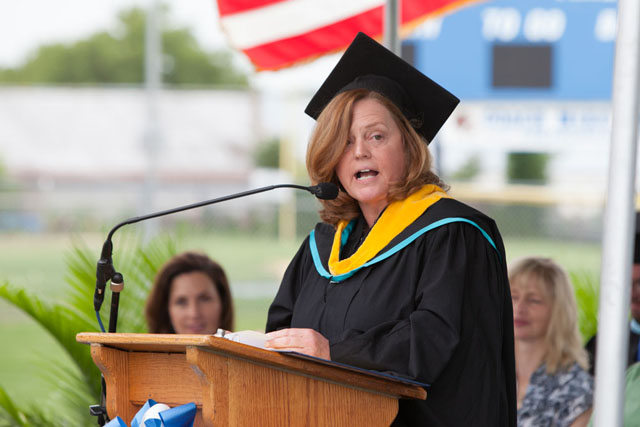