If new housing starts are an indicator of the state of the economy, as economists often claim, then Southold Town’s economy got a small boost last year.

According to statistics from the town building department, the number of permits for new residential construction jumped 25 percent in one year — from 48 in 2013 to 60 in 2014.

The same was true of neighboring Riverhead Town, which saw new housing starts rise from 46 in 2013 to 77 in 2014. Still, neither town issued anywhere near the number of new home permits it did during the housing boom of the early 2000s.

Reflecting on Southold Town’s total permit numbers for 2014, chief building inspector Mike Verity, who’s been with the department 19 years, observed that during the boom of 15 years ago, “one builder was putting in the same number of homes in a year.”

That boom was largely considered a product of the banks’ sub-prime lending practices at the time, which lead to a collapse of the housing market years later, according to Mitch Pally, executive director of the Long Island Builders Institute.

The numbers haven’t been anywhere near that for years “and never will be,” he said.

The number of new housing permits Southold issued fell from 351 in 2001 to 70 in 2008, and dropped some more in the following years, bottoming out in the 40s for the past three years, according to town statistics.

“There is definitely a trend up in investing in Southold,” said Southold Supervisor Scott Russell. “To get a full understanding of this upward trend, we need to look at all permit activity. While it may seem that construction of new homes is not as robust as it was over a decade ago, the trend now is actually to buy existing homes and renovate to suit. I haven’t done an analysis, but I suspect that there just aren’t as many vacant building lots as there were back then. Buyers are focusing on existing inventory and making substantial improvements.”

Mr. Verity concurred, saying there have been a lot of “tear-downs and rebuilds” in town.

The new home numbers in Southold and Riverhead towns seem to be consistent with what’s happening elsewhere.

“There’s no question that in 2014 there was an uptick in most places on Long Island, and in most categories, for home-building,” Mr. Pally said. “There’s been a pent-up demand and more financing has become available, so you’re seeing a gradual increase. You’re not going to see large scale residential development again on Long Island.”

Nationwide building trends show similar results, according to new housing start statistics collected by the U.S. Census Bureau. Last year, 4.8 percent more permits for new homes were filed nationwide — 1.03 million, up from 990,800 in 2013. Those numbers were also consistent at the state level. Last year, there was an 8.7 percent increase in the number of new home permits issued in New York, to 35,448, according to the Census Bureau.

RESIDENTIAL PERMITS BY YEAR FROM 2001 The Sports East property on Main Road in Mattituck where an indoor-outdoor athletic facility was first proposed nearly two... 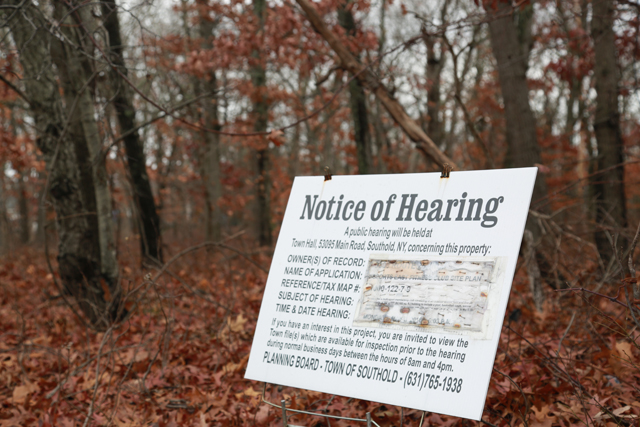 The New York State Liquor Authority ordered an emergency suspension Thursday for Vineyard 48 to forbid the sale or...

Judge fines owners of The Arcade in Greenport $5K

The owners of The Arcade in Greenport, which was shut down by the village May 1 for illegal rental...