Plans for a fourth lawsuit in the wake of July’s limousine crash that left four women dead have been filed, charging both the town and Suffolk County with “failing to own, operate, manage, plan, maintain, repair, design, inspect, supervise and control” the intersection where the fatal Route 48 crash occurred.

The mother of Amy Grabina, a 23-year-old Commack resident who was killed on July 18, issued a notice of claim to the Town of Southold and Suffolk County on Wednesday. Charges against the drivers of both vehicles, as well as their owners, are expected at a later date, according to Plainview-based attorney Frank Laine. “It was known for a substantial period of time that u-turns could not be made safely” at the intersection, the claim states.

According to Mr. Laine, “the family is just distraught and devastated by the loss of their daughter.”

In addition to the four women killed, four more passengers inside the limo were injured when the limo driver, Bethpage resident Carlos Pino, tried to make a U-turn at the intersection of Route 48 and Depot Lane. A pickup truck driven by Peconic resident Steven Romeo, 55, struck the limousine, killing Ms. Grabina; Stephanie Belli, 23, of Kings Park; Lauren Baruch, 24, of Smithtown and Brittney Schulman, 23, of Smithtown.

Mr. Romeo faces a misdemeanor driving while intoxicated charge for his role in the crash. The limo driver is not expected to face any criminal charges, prosecutors have said.

The notice of claim — which is an intent to sue — is the fourth against the town, all four of which have pointed to “negligence, carelessness and recklessness” on the town’s part.

Joelle DiMonte, one of the survivors of the crash, filed a notice in late August, the same day the town received a similar notice from the family of Ms. Schulman. One week earlier, the father of Ms. Baruch also filed a notice of claim against the town and county.

At the time of the accident, the intersection had only a flashing yellow light, but since then, Legislator Al Krupski announced that a full traffic light will be installed.

One of the survivors from the crash, 24-year-old Olga Lipets, filed a separate civil suit in Brooklyn earlier this month seeking monetary damages for the serious injuries she sustained.

Mr. Romeo is due back in Southold Town Justice Court on Sept. 18. The National Transportation Safety Board recommended New York pass legislation to require mandatory seat belt use for passengers in... 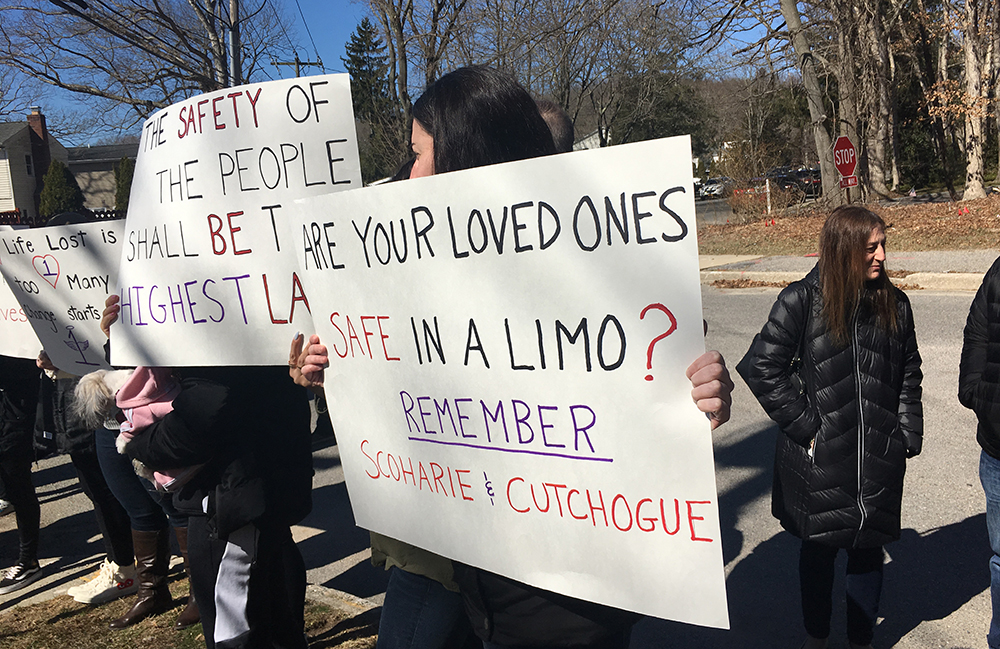