When 16-year-old Joseph Saporita saw flames begin to spark in the runaway bus he and 16 family members were traveling in, he noticed how scared his younger cousins were.

As the bus attempted to stop along the Long Island Expressway, the Southold High School junior, a member of the Navy Junior Reserve Officers Training Corps program, knew he had to be brave and stay focused.

For his saving the lives of his family members, Cadet Ensign Saporita was honored Friday during the Southold-Mattituck-Greenport NJROTC’s annual inspection at Southold High School with the program’s highest honor, the Cadet Meritorious Achievement Award.

It’s just the third time in the local unit’s 41-year history that a cadet has earned the award.

It all started with Joseph’s choice to sit in the back of the bus. He was the oldest among the cousins around him, ranging in age from 11 to 13.

“My first thought was the bus driver fell asleep at the wheel,” Joseph recalled in an interview Monday. “I thought the initial jolt would have definitely woke him up, but once we continued to slam into the guardrail, we knew something else was up.”

It was Sept. 20 and the family was en route to Citi Field to see the Yankees play the Mets and celebrate his uncle’s 50th birthday. The bus was traveling in the HOV lane when it suddenly swerved over to the right shoulder — rapidly crossing three lanes of traffic.

His father, Mark, was closest to the driver and started to relay information to family members as the runaway bus continued to slam against the guardrail.

“The first thing we heard was that the brakes were out,” Joseph said. “I then grabbed my little cousins next to me — pulled them in close — and had my arm around them.

“I knew they would go flying,” he continued, “so I put my knees up on the seat in front of me and braced myself with my knees while we just kept ramming the guardrail.”

Then everyone on the bus began to panic as they saw flames coming out of the front of the bus.

“We were going up on the grass and at that point we thought we were going to flip because the bus was tipping,” Joseph said. “But then the driver hit another guard rail on the side of the bus and everything stopped really quickly.”

Flames continued to spark and started reaching into the interior of the bus. A cooler had flipped over and blocked the front exit. The family was trapped.

That’s when Joseph found the emergency exit window and first helped his little cousins get out safely.

“The emergency handle on the window got caught on my cousin’s bracelet and started to fall, so I put my hand up to block it so it wouldn’t hit her in the back,” he said. “I could tell the second the window fell that she had a broken wrist.”

Joseph’s father, a physician at East End Cardiology, and aunt, a nurse at Peconic Bay Medical Center, tended to his cousin’s wrist by making a splint from a tree branch and an ACE bandage.

Joseph led his cousins about 100 yards away from the bus, told the oldest among them to watch over the children and then returned to the bus to make sure the rest of his family had exited safely.

“It was about 30 seconds after everybody was off the bus and the entire thing was engulfed in flames,” he said.

The family remained on the side of the road for about an hour. While traffic backed up, people passing by offered cases of water and granola bars, he said.

The police then drove the family to Kitchen Kabaret, a Jewish deli on Glen Cove Road in Roslyn Heights that’s one of the family’s favorite eateries.

“My family stops there every time we go upstate to visit my mom’s family,” Joseph said. “Once we got there, I felt more secure because it’s something that I’m really used to. Everybody got to Kitchen Kabaret — that’s when we all knew we were safe.”

Joseph said a relative who lives in the area met them at the restaurant. The baseball game was already halfway over. Feeling grateful that a tragedy had been avoided, the group just wanted to go home and spend time together.

When asked how he remained calm during the ordeal, Joseph said he knew he had to take charge of the situation because he’s the oldest.

“I looked around and my younger cousins looked really scared — I knew I had to step up and be responsible for them because their mother was closer to the front of the bus and, if something did happen, I had to react quickly because there was no way she could get back there to take charge of them,” he said.

Editorial: A salute to our local NJROTC

His experience this past summer at the Leadership Academy in Newport, R.I., where he learned how to sail for the first time, had also helped prepare him to make split-second decisions under pressure.

“You have to make a decision, even at a time where things might be bad, you have to stick with it,” he said of his sailing experience. “You have to do what needs to be done. You can’t let it get to you.”

On Friday, Joseph received NJROTC’s highest award — given to cadets who save lives — for his dedication and bravery.

One of his mentors in the program, Navy Counselor 1st Class Felicity Turner, said this is the first time during her eight-year tenure that one of her cadets has received such recognition.

“It’s an honor,” she said. “Joe always steps up and does the right thing. This is an example of it.”

His mother, Lorrie, said she was notified two days before he received the award and had to keep it a secret in order to not ruin the surprise.

“We’re very proud he received this,” she said, fighting back tears. “We’re very happy he’s being honored for his actions. It’s been a very emotional experience.”

As high school graduation nears for Joseph, he is gravitating toward careers that involve saving lives.

He’s on the fence about studying to become a cardiologist, like his father, or a neurologist. But Joseph said his NJROTC experience has inspired him to also serve in the military after he’s done with college.

“I felt very honored because it’s a very prestigious award and not many people get it,” he said. “I just hope that I can live up to that honor.” At Southold High School, senior Sabrina Basel is a member of the soccer and cheerleading teams, theater, on-air broadcasting... Friday afternoon at Southold High School, family and friends gathered to watch the Southold-Mattituck-Greenport NJROTC perform drills during the... 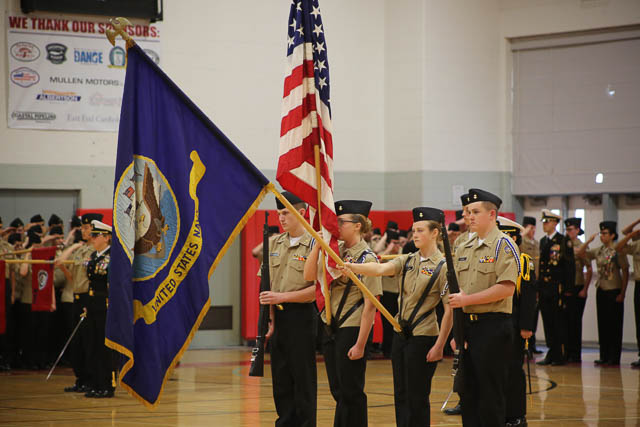 Cutchogue grad working on ship made with WTC steel

Although only in elementary school when the attacks on the Twin Towers occurred, Tracy Grim recognizes the important role... What flag means “preparing to replenish at sea”? How many Articles are there in the Constitution? What class of...