A Wiggins Street resident proposed moving the North Ferry queue off Wiggins Street and into a nearby MTA parking lot during a public hearing at last Thursday’s Greenport Village Board meeting.

But the president of the Railroad Museum of Long Island said that while his organization supports that plan, any work on that lot could face a number of obstacles that would add time and cost to the project.

The Village Board has proposed once again making Wiggins Street two-way in order to relieve traffic congestion caused by the North Ferry. It had two-way traffic until 2001, when it was changed into a one-way street in the direction of the ferry, for that same reason. The rationale was that restoring two-way traffic would give drivers getting off the ferry the option of going north on Third Street, which has a stoplight at Front Street, or turning left on Wiggins Street if Third Street is jammed.

But Wiggins Street residents have objected to this proposal, which would leave their street with two lanes of traffic plus a designated ferry lane for cars waiting to board the ferry.

Wiggins Street resident Ron Nelson, a retired physicist, gave a slideshow presentation last Thursday on a proposal that would move the ferry line off Wiggins Street and into the MTA parking lot adjacent to the railroad tracks, east of the Railroad Museum of Long Island and west of the East End Seaport Museum. He proposed having five lanes queued up in that lot, with large trucks isolated in one of those lanes.

Although just two Wiggins Street residents spoke last week, Mr. Nelson said many of his neighbors were present and do not support making the road two-way.

Mr. Nelson said he feels the traffic entering the ferry is a bigger problem than the traffic getting off the ferry. He produced linear foot calculations, based on Google Earth images, showing that the distance from the ferry to the Third Street stoplight is greater than the total length of the vehicles carried by a ferry with a 25-car capacity.

Under Mr. Nelson’s plan, Wiggins Street would remain one-way and Third Street would remain two-way. He also proposed angled parking north of the Railroad Museum and running alongside proposed five-lane ferry boarding area to replace the existing spaces that would be lost.

Railroad museum president Don Fisher cautioned that any plans for paving or installing drainage in the MTA lots near the ferry could run into obstacles.

For one thing, he said, there may still be “a large, monolithic block of concrete” buried underground from where the railroad turntable used to be. Also, he said, the water table in that area is very high.

Mr. Fisher said these things could increase the cost of any projects planned for the area.

In addition, the MTA properties near the ferry, including the Seaport Museum and the RMLI building, were designated as a Historic Transportation District in 1989, which means they come under state and federal regulation, Mr. Fisher said.

When the railroad museum had a problem with its electric service, they were told they couldn’t dig up the parking lot without having an archaeologist from the state on site, Mr. Fisher said. Also, he said, the North Ferry has lease agreements with the MTA for some of that land that won’t expire until 2021.

“The earliest you could put a shovel into the ground is five years,” he said.

Diane Walden, who has lived on Wiggins Street for 52 years, said a lot of the problem is caused by technology, because GPS devices tell drivers to go south on Third Street to access the ferry. Signs in the village direct drivers on Front Street to head south on Sixth Street, then east on Wiggins to get to the ferry, but officials say many drivers don’t follow these instructions.

Chatty Allen, who drives a school bus, said the ferry line often backs up to Sixth Street in the morning.

Trustee Mary Bess Phillips asked Mr. Nelson who would pay for the improvements he proposed.

“This is being done for the benefit of North Ferry, not for the people of Wiggins Street or the village,” Mr. Nelson said.

“I strongly feel the ferry company is going to have to come up with a solution,” she said.

The Village Board took no action on the proposal and opted to keep the hearing on the Wiggins Street proposal open for additional comments. With summer behind us, Village and BID look to address noise issues

Following a summer season in which noise complaints over loud music at area restaurants was a hot topic in... 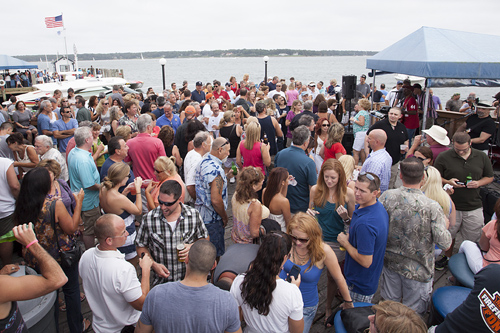 The Greenport Village Board discussed increasing fines for noise violations at its work session last Thursday, including potentially increasing...