Today, the North Fork is an established foodie destination. But in the early 1970s, residents were more likely to enjoy a hearty hamburger-noodle casserole at home than dine at the latest farm-to-table restaurant.

Happily, reminders of the area’s simpler culinary roots can be found in documents like “Cooking North Fork Style,” a 1974 cookbook published as a fundraiser by Sacred Heart R.C. Church in Cutchogue.

The book, a copy of which recently surfaced at a Connecticut thrift shop and was then mailed to Alfred and Marie La Licata of Cutchogue, is filled with local housewives’ recipes for everything from deviled crabs to champagne punch. According to a handwritten note preceding the table of contents, each was “tested by a practical housekeeper.”

“It’s a great little book,” Ms. La Licata said. “It brings you back in time a little bit.”

About six months ago, Mr. La Licata’s cousin Connie, who works at the Greenwich Hospital Auxiliary thrift shop, was surprised to find the cookbook for sale at the store. Unable to resist, she quickly purchased it and mailed it “home” to the North Fork.

“As I started looking through it and reading all these things, I thought, ‘Jeez, you know, this is great,’ ” Mr. La Licata added.

Mimi Ashton, a longtime Mattituck resident who contributed illustrations to the cookbook and helped assemble it, recalled that the document originally sold for $5 a copy.

“It was a real team effort,” she said, adding that the book ultimately raised $10,000 for Sacred Heart.

In addition to reflecting the area’s rural and agricultural heritage, the lengthy but compact cookbook offers proof that North Fork residents have long been proud of their history. This is reinforced by a poem printed on the book’s first page, which reads in part:

“New England may boast of its glorious bean,

But North Forkers await each harvest in turn,

The good hearty freshness, our A-1 concern.”

The content is divided into 15 categories, from appetizers to casseroles to kids’ dishes, the latter of which include Chinese noodle cookies, fruited coleslaw and Beedy sandwiches (an early version of the slider served on toast). The book itself features more than 250 recipes, some of which are no longer popular, such as Fluffy Pineapple Carrot Salad and “Great Lunch,” a casserole comprising chopped canned clams, American cheese, mayonnaise, lemon juice and chopped almonds.

Among the contributors to the book is Anne Olsen of Southold, a former Sacred Heart parishioner who contributed instructions for family favorites like her mother-in-law Hilda’s chocolate pudding cake.

More than four decades after it was published, Ms. Olsen, 72, said she still uses the cookbook “all the time.”

“You know when you want to make something and you go to certain cookbooks? This is one I definitely go to and use,” she said, adding that she especially likes the recipes for cranberry wine sauce and Christmas cookies.

Speaking of wine, the North Fork’s first vineyard had been founded just a year before, in 1973, but some locals were apparently ahead of the trend, with the book exploring the then up-and-coming industry in humorous fashion. The Beverages section documents one group’s attempt to make their own wine and one entry reads: “Sept. 30: Squeezin’ Party … All girls gained inches in their Maidenforms.”

Although Maidenform undergarments have been largely displaced by the likes of Victoria’s Secret lingerie, the former is still in business.

Similarly, while some of the cookbook’s recipes call for ingredients that are seldom used today — lard, Cheez Whiz and gelatin come immediately to mind — most are refreshingly familiar. And that’s what the La Licatas appreciate about it.

Despite their enthusiasm, the couple has yet to try any dishes described in the book. That’s because they haven’t found one that sounds low enough in fat.

“You know, I had a triple bypass and most of that stuff in there is not for me,” Mr. La Licata said with a laugh. With the simple goal to “extend love, compassion and hope to those in need,” the True Light Church in... 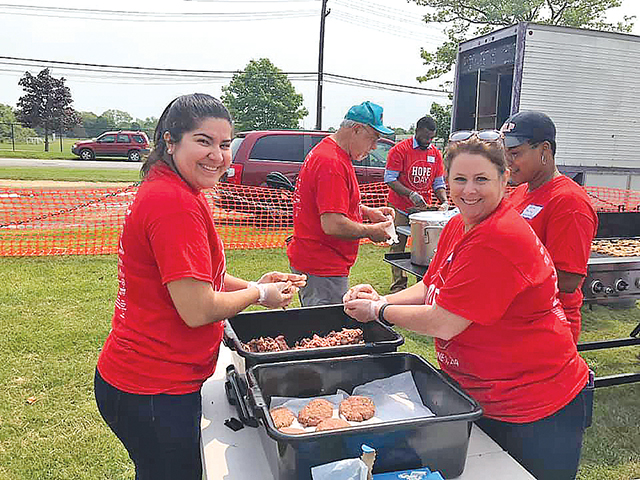 After dedicating 27 years to the U.S. Coast Guard and with two sons now off to college, Captain Brendan...