To say I have a love/hate relationship with sports previews would be way off the mark. At the same time, I cannot deny having mixed feelings when preview time rolls around.

Many years ago as a young sports reporter, I had grown to detest previews. It can be a challenge to spice up dry facts and figures into a story that readers will find interesting and not bland — but it can be done. From there, I grew to view previews as a necessary evil.

Since then, however, I have learned to appreciate the value of previews. They give readers an idea of what they can expect from their teams for the new season, get a lot of names in the paper and, not least of all, give the reporter story ideas for later in the season. There is a good deal of value to all of that.

But first, you have to reach out to the coaches, who have the information you need. Looking at a long list of coaches’ names that you need to track down can be daunting at the start of the process. “How will I ever get all this done before deadline?” you may ask yourself.

The first day of preview work is about spreading the word, letting coaches know you need to speak to them. So phone calls are made, lots of them. Emails and text messages are sent out.

Typically, that first day ends with not too much to show for it. Coaches have different work schedules and some are better than others at responding to messages. Usually I will have a few interviews completed on Day 1, still wondering how I will complete this Herculean task in time.

In the coming days, though, those Day 1 efforts start bearing fruit. Calls from coaches trickle in from morning into night. Sometimes two coaches will call you at the same time. You just put your head down, do your work and trudge forward. Before you know it, you see a light at the end of the tunnel. It’s a great relief when you realize you are going to get this done, after all.

When it’s all finished, there’s a sense of accomplishment, believe it or not. It’s a feeling that you had done the best you could.

The summer ended for me on Aug. 14 when preseason football practices began. That began a journalistic boot camp, waking up at 6 a.m., attending two-a-day practices (one early in the morning and one starting late in the afternoon). In between and after those practices, time was spent writing stories and selecting photos to run with them.

A friend seemed to have a hard time believing me when I told him that my life was temporarily put on hold while I go through these two weeks of previews. I really don’t have time for anything else, I told him. With 41 varsity teams from the six area high schools we cover this fall, it gets crazy. It’s a lot of work in a short time span. (For the record, our soccer beat writer, Michael Lewis, was a tremendous help in handling the boys and girls soccer previews).

The truth is, I love it, though. I must have printer’s ink in my blood. I love the satisfaction I get out of it, and perhaps that is because it is such a challenge.

As of today, it has been 25 says since the first day of preseason football practice. I am pleased to report that I am off preview duty — at least until November.

Bob Liepa is the sports editor of the Riverhead News-Review and The Suffolk Times. He can be reached at [email protected]. 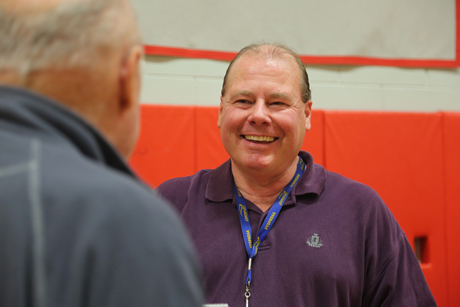 Column: Tracing back his love of history

I’ve been trying to figure out why I’ve been on this “All in the Family” kick lately. You know...