Four days before the mass shooting in Las Vegas that ended with 59 deaths and hundreds of injuries, representatives of law enforcement agencies from across Suffolk County gathered in Riverhead for the public unveiling of new equipment designed to aid officers in an active shooter or terrorist situation.

The Riverhead and Southold police departments have both received grant money through the New York State Division of Criminal Justice Services to purchase equipment like ballistic vests and helmets.

“Confronted by a situation like that [in Las Vegas], it would be very helpful to have this equipment,” said Riverhead Police Chief David Hegermiller. “It gives our officers an edge in situations like that so they can do their job and protect and safeguard the residents and visitors.”

The Riverhead Police Department received $52,425 to purchase protective equipment, including patrol rifles, according to Chief Hegermiller. The equipment has already been ordered and is expected to arrive shortly.

The Suffolk County Police Department received $240,000 that was used to purchase 60 patrol rifles, 156 ballistic vests and 156 helmets. A total of 15 law enforcement agencies in Suffolk County received portions of the $500,000 grant through the Police Protective Equipment Program.

“It’s definitely needed,” Chief Flatley said. “Any kind of training we receive for active shooter drills all revolves around having a heavy ballistic vest and helmet on before going into any situation. We’re trying to equip all of our front line cars with the vest and with the helmet that will be worn by anyone in the car that has to go into a scene like that.”

The department will be purchasing ballistic helmets and vests that are expected within the next month, Chief Flatley said.

“We’re appreciative of the grant. We probably wouldn’t have been able to purchase that without it,” he added. “Anytime we can get equipment like that on a grant it always benefits the department.”

At last Wednesday’s press event at Hotel Indigo in Riverhead, Suffolk Police Commissioner Timothy Sini described the 2016 nightclub attack in Orlando that left 49 people dead. A police officer was wearing a ballistic helmet when he first entered the scene. The helmet was struck by a bullet that would have otherwise have killed him.

“Because of equipment like this, that officer is alive,” Mr. Sini said. “And that is exactly why we have invested in this type of equipment.”

The threat of an active shooter took on even greater meaning Sunday following the devastation in Las Vegas, which has been described as the worst mass shooting in modern U.S. history.

“We’re asking our police officers each and every day to risk their lives and with the threat of global terrorism, particularly with homegrown terrorism, our local police agencies have to step up their game,” he added. “We’re going to ensure that our police officers, who we are asking so much from, are protected.” 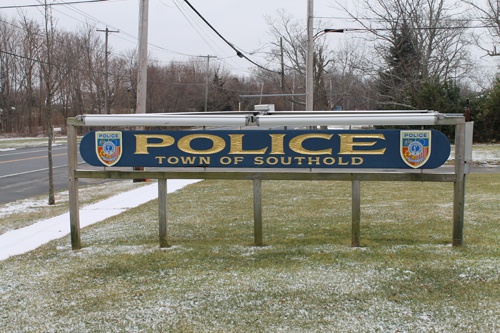 Southold Town Police said they have received reports from members of the local Hispanic community who have been targeted...

A Connecticut couple left their boat anchored while they went for a walk on the Orient Beach State Park...