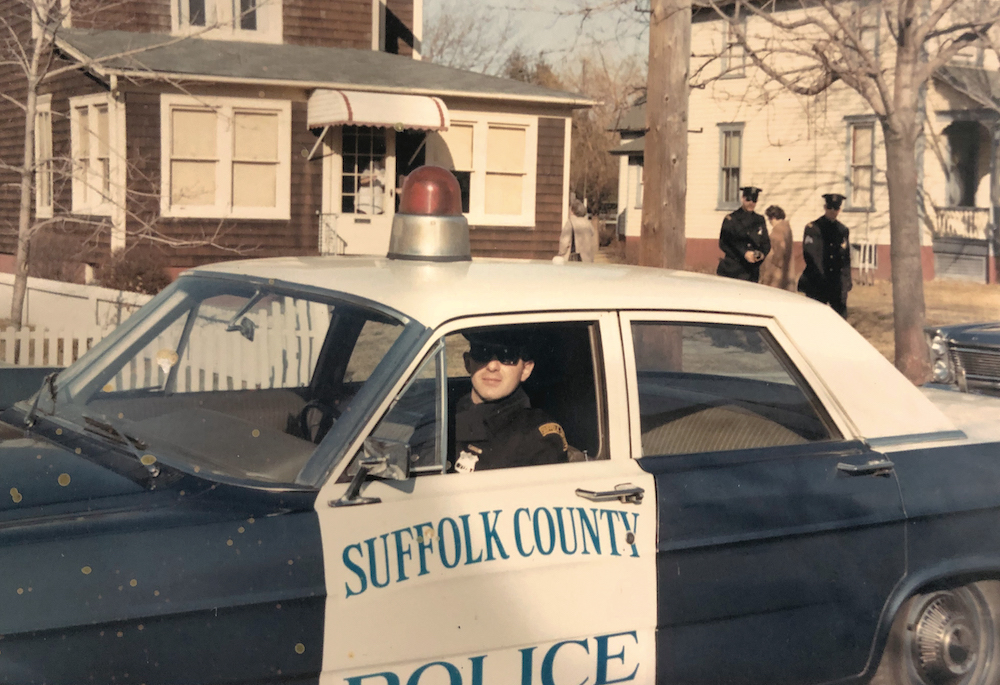 On April 20, 1979, a 13-year-old Smithtown boy named John Pius was found dead in a patch of woods behind an elementary school. His death had been remarkably cruel: He had been beaten, and stones the size of marbles had been shoved down his throat. He choked to death.

Among the Suffolk County Homicide Squad detectives whose work resulted in the arrests and convictions of four teenaged neighbors of the dead boy was Anthony Palumbo.

“Tony’s work was key to this horrible case,” said former Suffolk County District Attorney Thomas Spota, who prosecuted the four. “He did terrific work, and because of it we got the convictions we needed.”

Like any fundamentally good man who was also involved in the extreme challenges of murder investigations, Det. Palumbo’s work on the case — and scores of other crimes, but few as horrific and emotionally wrenching as the Pius case — deeply impacted his life. How could it have been otherwise? The victim was a dead and tortured 13-year-old, the only child of John and Barbara Pius, and the investigator had two daughters, Lori and Sharon, and a son, also named Anthony.

“I was only eight years old then, but I remember him sitting at the kitchen table with all the paperwork on the case going over it, day after day,” said his son. “We all knew not to go near that table! It was so important, and such a huge case at the time. He lived it for weeks and months on end.”

Mr. Palumbo died Jan. 3 at his Mattituck home. He was 80, and had battled lung cancer. For days before his death, many of the people he had worked with came to the house to sit and chat with him about their time together, even as Mr. Palumbo and his family, as well as the visitors, knew the end was near.

By all accounts, Mr. Palumbo approached death with grace, knowing he had done his best in his career and, with his wife, Diane, had built up a strong, well-grounded family. Those who were with him in his final days said he expressed no regrets. He did not fear the end; rather, he was a man who believed his faith would carry him across the finish line, and that all would be made right.

“Tom and my father had become very close through the years, and it was very good that he came out to see my father at the end,” the younger Palumbo said. “He was very loyal to my father. They had done a lot together.”

Mr. Palumbo was born in Brooklyn and grew up in Patchogue, where he graduated from high school. He spent several years in the Coast Guard on the West Coast, and when he came home, he told his father, a carpenter, that he wanted to go into law enforcement and join the recently formed Suffolk County Police Department.

That father-son conversation would nearly mimic the talk the younger Palumbo — who went on to law school, became as assistant prosecutor in the Suffolk District Attorney’s office and is now a state assemblyman — would have with his father decades later.

“My dad married and they’d had my sister when he joined the police department, which then was only a few years old,” Mr. Palumbo said. “With a family, he certainly wanted a secure job and future. He went in in 1962. He had 26 years on the job when he retired in 1986.

“He was making very little money in those days, and to make ends meet for the family he drove a bus and installed cabinets,” he added. “He was in vice, in the detective squad. He did some undercover work. He infiltrated a group and bought $1 million in counterfeit bills out of a hotel near JFK airport.

“He was in uniform for about three years. He was very busy, he would tell me. He worked mostly in the Fifth Precinct and the Fifth Squad, then the Third Squad. At that point the chief of detectives asked him to come to the Homicide Squad. And he was there for 12 years.

“He was a shining star in that squad,” his son said. “All the cases deeply affected him, no matter who it was or the person’s station in life. Years later when I went into the DA’s office, he said these cases will be the most rewarding you will ever have. Bringing closure to a family in which something violent and horrible has happened is so crucial. He would say when you deal with homicides you have two families that are destroyed, the victim’s family and the perpetrator’s.”

To the son, the father’s lessons — learned from the harshest and most tragic aspects of law enforcement — is how to live your life with compassion and zeal.

“To my dad, that didn’t mean being overly zealous,” Mr. Palumbo said. “It means being smart and compassionate. When I started in the DA’s office, he said, ‘You need to have compassion. The 18-year-old kid stealing liquor bottles is different from an organized gang.’ Discretion in law enforcement is so important because you have tremendous power.”

Mr. Rodriguez said he remembered the day Det. Palumbo joined the Homicide Squad “as if it happened three weeks ago. He immediately assimilated himself into the team. He was that kind of guy. He wanted to contribute to whatever was going on, and be a team player. Tony and I retired on the same day in ’86.

“When I look back on my career, I am delighted I was surrounded with people like Tony,” he added.

Judge Mazzei said the retired detective called him Dec. 23. “It was a phone call to basically say goodbye,” he said. “I have known him almost my whole life. His wife, Diane, babysat for me when I was a baby and we were living in Blue Point. Her parents ran a stationery store.

“When he called that Sunday before Christmas, I said, ‘Tony, I have to come see you.’ We drove out the next day, which was Christmas Eve, to see him that last time. He was aware of everything going on. We sat in his bedroom and then the kitchen. He knew it was a matter of time, and he wanted to say goodbye. I am just so thankful I saw him that day.”

While Mr. Spota had known the detective before the Pius case, that horror story cemented their deep friendship. Det. Palumbo recorded a confession from one of the four teenagers — the Pius boy was murdered because he saw them stealing a worthless minibike, according to trial testimony — and when that was played in the courtroom, John Pius, the deceased boy’s father, exploded in rage and had to be restrained by several court officers. Every day of the trial — and subsequent retrials — was noted for the hatred the Pius parents felt toward the defendants. The air in the courtroom was so thick with tension it could be cut with a bread knife.

“I tried a lot of violent crime cases,” Mr. Spota said, “where he was the lead detective. These were the kinds of cases, because of their cruelty, that you never really get over. That was certainly true with Pius. Tony was devoted to every case. And he was so devoted to his family, and to Diane. He loved life. He embraced it — and this after seeing the very worst of humanity. He was the best of the best.

“We would always go out to dinner at the end of December each year to celebrate his wife’s and my wife’s birthdays,” Mr. Spota added. “So Mary Ellen and I visited him right after Christmas again. It was a good day for him.”

The man they sat with that day made this point very clearly: “He said he had a great life and that his time had come. He said, ‘I am prepared for the afterlife. I have no regrets.’ ”

GOP selects Jodi Giglio as its candidate for state Assembly

Riverhead Town Councilwoman Jodi Giglio will be the Suffolk County Republican’s candidate for the state Assembly seat being vacated... Anthony Palumbo, who has held the 2nd District state Assembly position for the past seven years, has now emerged...