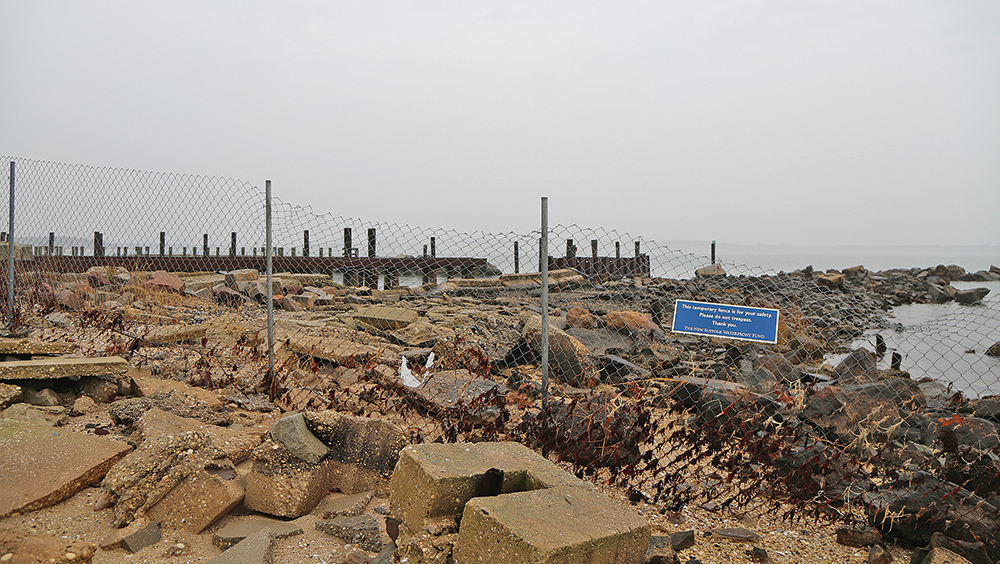 After clearing a final permitting hurdle, construction to replace a dilapidated jetty on the New Suffolk waterfront could begin as early as next week.

Last month, Southold Town Trustees granted a wetlands permit to the New Suffolk Waterfront Fund, a nonprofit group that owns and maintains 2.5 acres along the waterfront.

The jetty, a historic steamship pier, will be rebuilt and the elevation of rocks on the east side will be raised to protect the new bulkheads and marina from southeasterly storms. Five pilings in the marina will also be reset to better utilize dock spaces, according to a wetlands permit application.

“It’s just fallen into complete disrepair,” New Suffolk Waterfront Fund chair Patricia Lowry said in an interview Tuesday. A photograph of the site from 1958 shows an active, bustling marina and boat storage. For the past several years, a chain-link fence has blocked access to nearly a quarter of an acre along the bay.

Ms. Lowry described the project as the “final piece” of protecting the land and marina from storms. Since they purchased the property in 2007, the group has helped transform the former Galley Ho restaurant into Case’s Place, rebuild the 15-slip marina and, last winter, rebuild the north jetty. “We’re hoping that protecting it will make it a safer harbor for everybody,” she said.

The property, located near the intersection of First and Main streets in New Suffolk, also has a small picnic area, community garden and historical buildings, including one associated with trials for the United States Navy’s first submarine, the USS Holland. The port served as a submarine base from 1897 to 1905.

In addition to providing coastline protection, Ms. Lowry said reconstruction of the south jetty is a nod to the area’s history and will ensure access to all.

“People will be able to walk out on it again,” she said.

With panoramic views of Cutchogue Harbor and Robins Island, the new jetty will provide public access for walking, sitting, picnicking and fishing.

The New Suffolk Waterfront Fund is aiming to raise an additional $100,000 to enhance the jetty with walkways, benches, plantings, railings and a sign once completed. Ms. Lowry declined to disclose the jetty construction price but noted that all the money was raised through fundraising over the last decade.

She said Araiys Design, a landscape architecture firm based in Southampton, has agreed to provide a pro bono design for the southern portion of the waterfront property, including the jetty and area along Main and First streets.

Stacy Paetzel of Marshall Paetzel Landscape Architecture created plans for the rest of the property in 2016, Ms. Lowry said.

As a term of Trustee approval, the organization has two years to complete the project. Ms. Lowry said Latham Sand & Gravel is expected to begin bulkheading work next week. They anticipate completion by summer 2020, just in time for the Wednesday night sailboat races.

For more information on the organization or to make a donation, visit newsuffolkwaterfront.org.