Msgr. Joseph Staudt came to Sacred Heart Parish 12 years ago, filled with trepidation about what his new assignment would bring. He had been a very happy pastor at Christ the King R.C. Church in Commack, and when he learned he was being sent to Sacred Heart in Cutchogue, he worried that he was not up to the task.

“My initial reaction was fear,” said Father Joe, as everyone in the parish calls him. “I had been in Commack for 10 years. A lot had been turned around. Now I was being moved. I was told they were having problems out there. I felt inadequate.”

A number of priests later identified in the 2002 Suffolk County grand jury report on the priest sex abuse scandal had served in Sacred Heart, which then had two churches, Sacred Heart in Cutchogue — now shuttered — and Our Lady of Good Counsel in Mattituck. Many parishioners were angry these men had served here without anyone being informed of the horrific allegations against them.

If the sex abuse scandal is the giant elephant in the Catholic living room, that elephant was front and center in Cutchogue and Mattituck — with Father Joe tasked to return trust to a parish where trust had been violated.

So on June 18, 2007, he arrived in Cutchogue. He knew he would work hard; that was a given. He knew in his homilies he would talk about what people were going through in their daily lives, reinforcing that God’s love is infinite; that was also a given. And he knew he would speak to the core messages in the Gospels – forgiveness, love, redemption.

He served his first six years and asked the diocese to continue for another six years, which he has now completed. He hopes to stay for another four years before he retires. The parish where he was worried he would not perform well is now a place he doesn’t want to leave. Nor does the congregation want to let him go.

A fit and youthful 68, he says he still wants to serve. His passion for what brought him to the priesthood 41 years ago remains strong and on full display every time he steps onto the altar for the Mass. As evidenced by the scores of laudatory letters The Suffolk Times received about Father Joe, and for what he has brought to the parish, he is The Suffolk Times Person of the Year for 2019.

These letters and emails describe a priest who speaks to them, who is among them — a sheep among the flock — who is not loath to talk about his own problems, and problems within his own family, and whose steady theme since his arrival has been to stay faithful to God, even when the unthinkable happens in your life that could make you turn away.

What are some of the things he wants to accomplish if he is lucky enough to remain in Cutchogue until his retirement? “I want to encourage people to gather together and see this as their parish and their home,” he said. “I want people to believe in this quote in Isaiah, chapter 41, versus 13: ‘For I am the Lord your God, who takes hold of your right hand and says to you, Do not fear. I will help you.’ ”

Jack McGreevy of Mattituck, one of many who wrote in support of Father Joe, said in an interview that “he is a man of the people, and he is inspiring and speaks to us at every Mass in words we should hear. We are so lucky to have him.”

Here are some excerpts from the letters people wrote about Father Joe: “He is kind, compassionate, smart, funny and good to everyone he meets, no matter what religion he/she is.” And: “He welcomes all people to our services, stressing God’s love and our need to work in our community to help those in need … he also teaches English as a second language to those who need that help.”

“Coming from a large family, he understands the issues families face and is able to relate to people of all ages, from teens to seniors. In these trying times, Father Joe is a role model of a faithful, compassionate human being and priest, always ready to stand with his parishioners.”

In a handwritten note: “… he is not only a pastor but a true friend to all. We can speak to him regarding anything and everything.” A few more samples: “Father Joe has brought the parish together … He oversees at least 30 ministries and also reaches out to the Spanish- and Polish-speaking community.” Another: “…he is a proponent of social justice for all.”

When he was interviewed for this story, Father Joe downplayed the praise and said he is uncomfortable in the spotlight. But his work speaks for itself, supporting Maureen’s Haven, teaching English at Cutchogue New Suffolk Library, and also — adding to his many duties — acting as administrator of Our Lady of Ostrabrama R.C. Church, the historic Polish church on Depot Lane in Cutchogue. His plate is full.

As one person who wrote in praise of Father Joe put it, “Since his stay within our community, his participation in many areas of civic activity, interfaith relationships, care for the poor and ailing, among other attributes, has been an asset to all … he has enhanced the betterment of our town.”

Looking back on his journey, Father Joe sees some very critical turns in the road, where doubt held its own for a while, only to be replaced by that inner voice and light that has pushed him along.

And there is this story about his mother: “When I was in Catholic grammar school, my mother said to me when I was polishing my shoes on a Saturday night before church, ‘I just want you to know, don’t feel any pressure [to be a priest]. If you feel this is not for you, we will always love you.”

Well, this can be said, for certain: It was for him. And he belongs on the North Fork. Seated in the bleachers at Floyd L. Maines Veterans Memorial Arena in Binghamton, as the Greenport boys basketball team... 2019 Sportsperson of the Year: Skip Gehring

The praise coming from those who know him is as generous as the man himself. Generosity sprouts from Skip... For over 50 years, the mission of Community Action Southold Town has been to serve low-income families and individuals... 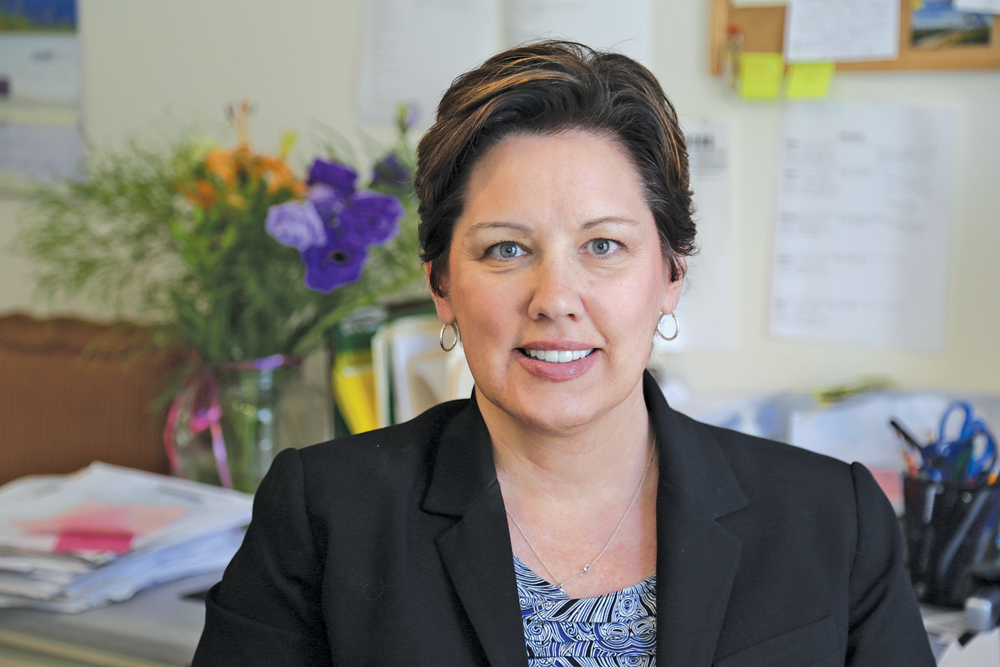