Most artists would faint at the thought of someone sitting on their work, but those featured in the new exhibit at Peconic Landing’s outdoor sculpture garden don’t mind if guests use their masterpieces as a resting spot. In fact, they encourage it.

That’s because their pieces of artistic genius are, in fact, benches.

This summer the three-year-old permanent outdoor sculpture garden at the Peconic Landing retirement community is presenting a new exhibition called “The Rest is Art: A Celebration of the Bench as an Art Form.”

“The exhibit was born out of a simple idea,” he said at the opening gala on Sunday, June 30. “We had no place to sit and no one was going to pay for benches!

“In all seriousness, though, we had lots of beautiful artwork, but we needed fewer larger pieces and more seating.”

The result was functionality meeting creativity.

The display features artistically designed benches created by artists from around the world, whose works were selected by members of the Peconic Landing resident art committee. Seven benches from six artists were chosen to be displayed in the garden, on the grounds of historic Brecknock Hall.

One of the featured artists is Steven Ceraso of Bay Shore, who teaches woodworking at the 3rd Ward school in Brooklyn. Mr. Ceraso used a piece of “live edge” lumber for his bench, meaning that he incorporated the natural edge of the wood in his design. This choice resulted in the “Ailanthus Bench,” a simple bench that highlights the wood’s natural state.

“It’s different to make furniture from a fine arts background,” Mr. Ceraso said at the gala. “Ailanthus wood is unique because it’s an invasive species in urban areas like Brooklyn and Queens, so there’s a question of what to do with it there. I like that I turned a problem into … not a problem, by repurposing the material.”

Artist Nico Yektai also created a traditional wooden bench — but his had a slightly different twist.

Mr. Yektai is a professional furniture designer for his own company. His bench for the sculpture garden is one of his first outdoor pieces.

His creation, entitled “Bench #2,” features a huge slab of mahogany as the seat of the bench and a smaller piece as the backrest. Concrete blocks attach the pieces together and also serve as the legs.

“I wanted to use concrete because it doesn’t care about the elements of nature,” Mr. Yekai said as he pointed to the grass surrounding the concrete supports and a bug crawling up one of them.

Jeffrey Grippin, a former bridge builder from upstate New York, created a piece that looks as much like sculpture as furniture.

Mr. Grippin, who owns as welding shop, created his piece from rough-cut hemlock and welded pieces of steel. The bench of hemlock is a square shape and surrounds a large sculpture of an armillary sphere, a framework of rings that serves as a model for objects in the sky. It is positioned to point due north.

“Everything I do is so practical, so I was just thinking of a bench, but my son said that I had to let go and get more creative,” Mr. Grippin said.

His piece has a nautical theme, with sculpted designs like an anchor, clock, star and planet decorating the supports between the bench and the ground.

In addition to the selected professional artists, benches created by Mattituck High School students are also part of the exhibit.

The students designed benches using snowboards during art class, under the direction of art teacher Dina Rose, and applied to be included in the show with the rest of the artists. Six student benches were selected.

“My family has a cabin in Vermont, and I just love the snow and winter,” Ms. Kluko said about how she chose to design the piece. “Also, when I was making it, it was really hot out, so I imagined how nice it would be if it was wintertime.”

The partnership between the high school students and Peconic Landing was well received, and the art committee ended up organizing a $250 scholarship to be used in the school’s art program.

“It was all about the artists to me, the high school ones, too,” Mr. Antignano said.

Next year, the art board hopes to extend the show by bringing the benches into parts of the community.

In addition to the new benches, there are 10 other sculptures in the garden as part of the Living Gallery Collection.

The sculpture garden is open for self-guided tours daily from 10 a.m. to 4 p.m. until Oct. 31 on the grounds of Brecknock Hall. Over the past two months, studio and advanced art students at Mattituck High School have been creating portraits of... North Fork native makes her mark in the art world

A few weeks before opening day, Kate Moore toured the new home of the Atlanta Braves, SunTrust Park. A... 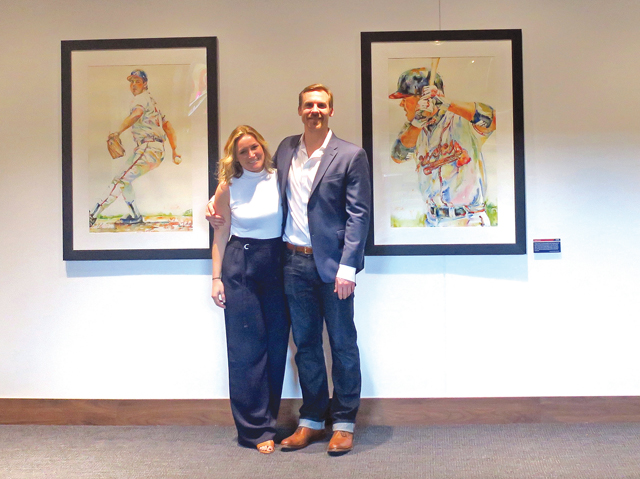 The Old Town Arts and Crafts Guild held an opening reception for their Spring juried art competition show and...