Nobody wants to be the new kid in school. That’s a lesson long taught to students to help them better understand the impact of bullying.

Now, technology introduced to students at New Suffolk Elementary School is helping them share that valuable lesson in an interesting way. The school’s fifth and sixth grade class is using iPads to create a mini-movie that will serve as a public service announcement on bullying.

The students have already written and recorded the video, which they will soon edit into a movie called “New Kid,” which explores how students can help support friends who have been bullied or have bullied others.

The idea for the movie was sparked by a lesson called “reader theater” in which kids practice reading aloud by acting out a short play, teacher Nicole Pollina explained.

“The children took it all on their own and came up with the topic of bullying,” she said.

Twelve-year-old Jonathan Blanchard, who is starring as the bully, said the goal is to teach viewers how to be a role model.

“We hope it will teach younger kids that it’s not OK to be a bully,” he said.

Classmate Katheryn Vitiello, 10, said “You shouldn’t judge a book by its cover” and that if you find yourself being picked on you shouldn’t “try to get revenge.”

“Maybe the bully has a problem of their own and needs help too,” she said. “Try to talk to the bully and use your words.”

Ten-year-old Robbie Cooper, who plays the victim, said the movie is more than a class lesson.

“I would feel bad if this was really happening in real life,” he said. “Kids, they need to know how to handle it when they go to another school.”

Ms. Pollina said her students have learned that they are bystanders when they don’t do anything to help a person who is being bullied. It’s when they stand up for a victim that they become an upstanding citizen.

The students have also used iPads to create posters, power point presentations and voiceovers for other projects, Ms. Pollina said.

“We sit down to touch base with them to see if they have any questions, and most of the time everything I have planned to go over, they already know how to do it,” he said.

The bullying video will be released on the school’s website, newsuffolkschool.com, this spring. The New Suffolk School District, which has just 15 students, could end up shutting its doors in the near... 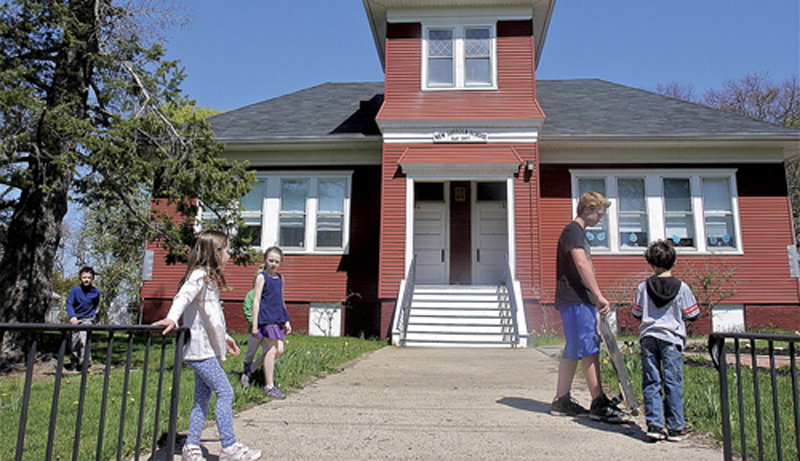