When Oysterponds Elementary School art teacher Laurie Sanders hoisted up a fish in front of a group of students last Friday, first-grader Mackenzie Thompson knew exactly what kind it was.

“Porgy!” Mackenzie exclaimed with a smile.

Moments later, she and her fellow classmates took turns painting one side of the fish — half black, half blue — for a fish-printing project.

“He’s ready,” Ms. Sanders told Mackenzie as she placed a piece of paper over the fish and pressed down.

The lesson is part of the school’s new Colonial Life Summer Camp, where students are learning about the area’s maritime and agricultural history. The program also includes visits to local farms and fishing boats.

“Fisherman didn’t have cameras back then,” Ms. Thompson explained to her students, “so they would make a fish print to prove how big their catch was.”

For the first two weeks of summer camp, students are learning how fishing methods have changed over generations. They’ll learn about traditional farming methods over the last two weeks.

Ms. Sanders, along with principal Jenn Wissemann and teachers Julie Eyster, Joanne Simicich and Brittany Knote, have been working with the Oysterponds Historical Society to develop this year’s theme and aligned the summer camp’s curriculum with Common Core standards.

The program’s main focus is to provide students with a new understanding and appreciation for the area’s rich history, said superintendent Richard Malone.

This year’s group of students also includes children from out of the district and children here for the summer. Out of the 39 students enrolled, he said, 19 take remedial classes an hour before the summer camp begins.

This is the first time the district’s budget has included transportation, which has allowed more students who need remedial services to attend the camp, Mr. Malone said. Most parents with children in need of extra help in core subjects said they couldn’t drop off or pick up their kids at the camp, he said.

The program has added significance, he said, because research shows children who have no form of school routine over the summer months lose some of the progress they’ve made during the school year.

Mr. Malone said there’s also a technology component to this year’s curriculum in that students are using iPads and a green screen to create videos showcasing what they’ve learned.

“It’s more hands-on, free, open and there’s a recreational piece to it,” he said. “It’s a morning program, so the kids still have the rest of the day to spend time with their families.”

Registration for next year’s program is expected to begin in the spring. For more information, contact the school at 631-323-2410. Could Oysterponds students soon have the option of attending junior and senior high school on Shelter Island? See what’s new this year at our local schools

Schools across Southold Town opened this week and many new faces greeted students as they got off the bus,... 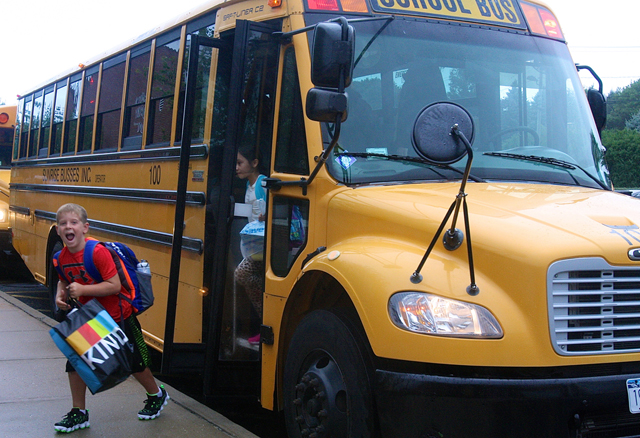 While their peers across the North Fork tossed their caps Saturday, as has become tradition Greenport’s senior class had to...