Walking among the five buildings that comprise the East End Arts complex can feel more like taking a stroll through a country estate than an organization’s headquarters.

The structures on the property — two houses, a one-room schoolhouse, a carriage house and a barn — are enhanced by a white picket fence and connected by brick walkways to a central brick patio. Each building contains mementos from its origins in the early- to mid-1800s, making them some of the oldest buildings on Riverhead’s historic Main Street.

“We kept some things,” said Pat Snyder, executive director of East End Arts. “There was a fireplace in every room … I really felt it was important to keep one. There are original pocket doors. There’s just some beauty that had to be kept.”

East End Arts’ current gallery, known as the Davis-Corwin House, was constructed in 1840 and is the oldest house on Main Street, according to local historian Richard Wines. East End Arts, which promotes arts education and advocacy, has occupied the building since 1977 and leases it from the Town of Riverhead.

The exterior of the two-story house is a combination of Federal and Greek Revival architecture, Mr. Wines said. Later additions include a front porch, bay window and el at the structure’s rear.

The first-floor layout of the Davis-Corwin House was changed to accommodate the gallery, but the second floor remains mostly untouched. Former bedrooms are used as offices and the upstairs bathroom retains its original clawfoot tub.

Offices in the rear of the building are accessed by steep, narrow stairs that resemble a ladder. At one point, Ms. Snyder said, that area functioned as maids’ quarters.

“The kitchen was divided into two rooms,” she added.

The basement, constructed entirely of stone, is accessed through a trap door in the floorboards of the porch on the east side of the house. The basement of East End Arts School, located directly east of the Davis-Corwin House, has the same features.

The building that now houses East End Arts School was constructed sometime before 1870 and is officially known as the Benjamin House. According to Mr. Wines, it was built by Moses Benjamin, who owned a drug store at the corner of Roanoke Avenue. Hanging on a wall at the top of its staircase is a painting of one of the Benjamin children — a young girl Ms. Snyder believes was named Penelope.

Another unique feature of East End Arts School is a bill of sale for the building that’s hidden inside a closet in one of its main classrooms. Instead of being a standard paper document, this bill of sale was written directly on the wall. It is dated Sept. 20, 1920, and signed by then-homeowner Everett Benjamin.

“My favorite is the bill of sale on the wall,” Ms. Snyder said. “It’s written in pencil, which is very cool.”

East End Arts’ Carriage House, which is located a few feet behind the Davis-Corwin House, dates to at least the 1870s. Mr. Wines described it as a two-story timber-framed building covered with vertical wood siding.

Ms. Snyder said the building was originally more of a garage-type structure with an open double-height center section flanked by a wing on either side with two separate floors.

In 2007, the building’s main floor was converted into an art studio. The separate second floors were merged and now contain a studio apartment and living area for EEA artists in residence who visit during the summer. Plans for a recording studio are in the works.

“There’s a really interesting roofline in the room that developed when we connected the two second stories,” Ms. Snyder said. “So when you look up, you see it’s kind of interesting.”

Situated diagonally across from the Carriage House is the Benjamin Barn, built circa 1860. The yellow-hued structure still sports it original exterior siding, except for the back wall, which has been covered with a mural of a farmer on a tractor. The Benjamin Barn is currently used for storage, but Ms. Snyder said EEA’s long-term goal is to turn the space into a ceramics studio.

The oldest building on the East End Arts campus is the 432-square-foot Fresh Pond Schoolhouse. The one-room building, which sits behind the Benjamin Barn, was moved to the property in 1977 from its original location on Sound Avenue in Baiting Hollow.

Originally built to comply with a state law that required public education, the structure was once one of 15 single-room schoolhouses in Riverhead Town, Mr. Wines said.

In 1978, the schoolhouse was rebuilt. Last year, it was redesigned with late Victorian details to more closely resemble the way it looked in 1821, when it was a working one-room schoolhouse. Items from that time — such as the original blackboard, wood stove and door latch — are still showcased inside.

Ms. Snyder said it has been a priority for East End Arts to preserve the history of each building, both for the aesthetics of the spaces themselves and because doing so meshes with the organization’s work.

“For me, personally, it’s like working at home,” she said. “It’s a nice building for an art organization to be in. It kind of feeds creativity as opposed to, maybe, a box. I always feel just very comfortable here.” While growing up in New Suffolk as a teenager, Deirdre O’Connell worked her first job at Nolan’s Village Market... Real Estate: What to look for in your retirement house

As the kids move out and careers come to a close, the next step for people is often selling... Despite an overall drop across the East End in single-family home prices, properties in Riverhead, Southold and Shelter Island... 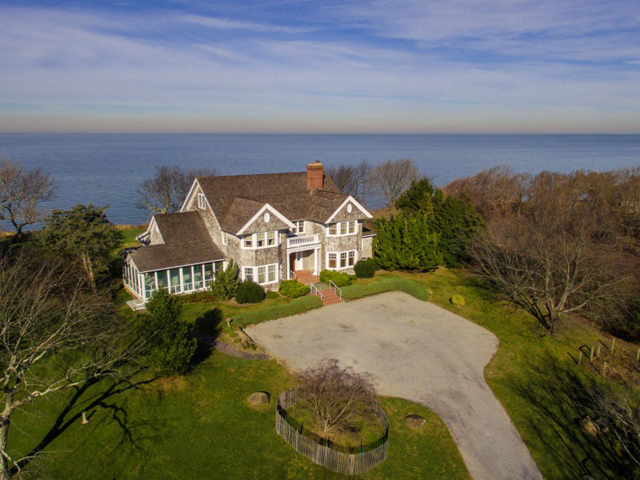