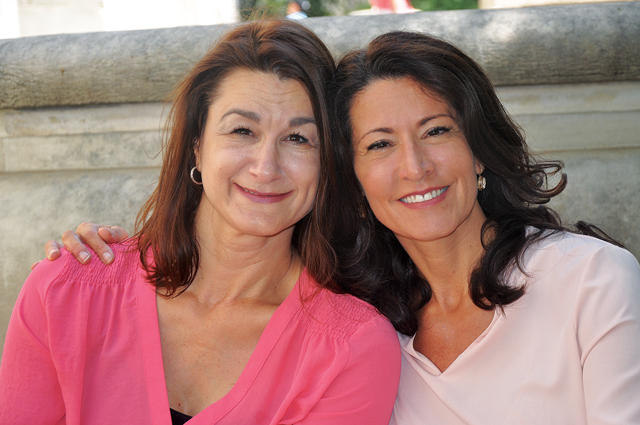 In the acknowledgements of “Etched in Sand,” her 2013 memoir about her abusive Long Island childhood, New Suffolk author Regina Calcaterra said her youngest sister, Rosie Maloney, had “her own story to tell” — and that she would encourage her to write it “when she was ready.”

That time has come. Ms. Maloney, 44, is about to release “Girl Unbroken,” which she co-wrote with Ms. Calcaterra, 49. The book, which comes out Oct. 18, recounts the horrors Ms. Maloney endured after she and her brother, Norman, were separated from their three protective older sisters by social services and later kidnapped from foster care by their abusive alcoholic mother.

Ms. Maloney, who now lives in Salt Lake City, Utah, with her husband and three children, said she was initially reluctant to share that at 8 years old she and Norman were taken to Idaho by their mother, who beat them regularly. But she became emboldened after reading Amazon.com reviews for “Etched in Sand” in which many readers wondered what had become of her.

“Regina started sharing the magnitude of readers who were interested in my story,” Ms. Maloney said. To write the book, the sisters held weekly Skype sessions, dissecting decades-old memories: going hungry more often than being fed, being abandoned by their mother for months at a time, living in cars and seedy motel rooms and being subjected to countless beatings. Ms. Maloney was also compelled to remember her horrific time in Idaho, during which she was molested by her stepfather and forced to work on the farm where her mother had settled.

“It was an interesting process with this whole thing,” Ms. Maloney said. “The more we started talking about it, the more I started recollecting.”

That’s not to say writing the book was easy.

“As opposed to sitting there with your sister and talking and laughing and watching horrible movies on TV, we had to be very disciplined,” Ms. Calcaterra said. “We had to work on it every single weekend and the entire manuscript was due the first week of January.”

Although it was painful for Ms. Maloney to revisit her past, Ms. Calcaterra said the project had a healing effect on her youngest sister, to whom she has always referred affectionately as “mia bambina.”

“I saw Rosie just absolutely own her story, own her background,” she said. “Own everything that happened to her. Accept it, embrace it and just start being so confident about the fact that she survived this.”

Ms. Maloney, who said she forgave her mother shortly before she died in 1999, agreed.

“It was such an amazing experience for me to be able to dissect everything and make sure I was good,” she said. “As Gi said, I owned it. I was over it before, but even more so now.”

Ms. Maloney, whose oldest children, ages 15 and 18, are aware of her past, said learning about their mother’s experiences has put their own lives in perspective.

“They really thought having to do homework and take a shower and do chores was difficult,” she said. “As a parent, I’m grateful they understand things can be so much worse.”

Although “Girl Unbroken” has already gotten a positive response, the sisters have no plans to write additional books.

“I think we have more than enough,” Ms. Calcaterra said. “For now, we’re just going to enjoy the success of ‘Girl Unbroken.’”

From noon to 2 p.m. Sunday, Oct. 16, Ms. Calcaterra, Ms. Maloney and their siblings, Cherie, Camille and Norman, will host a book signing at Laurel Lake Vineyards in Laurel. Free to the public, the event will include light refreshments and advance copies of “Girl Unbroken” will be available for purchase. A longtime Riverhead school administrator will be taking on a new role in Southold Town next month. New Suffolk school board members approved a $1.01 million budget for the 2019-20 academic year Tuesday, along with one...