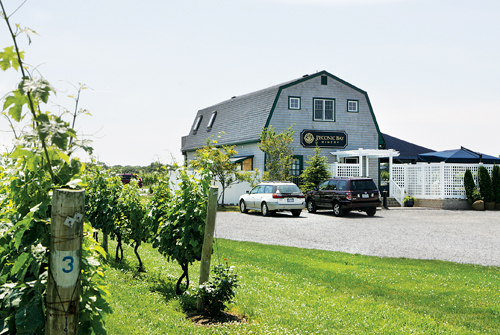 Stefan Soloviev, real-estate magnate and owner of Crossroads Agriculture, plans to add the 53 acres that comprise Peconic Bay Winery in Cutchogue to the more than 1,000 acres of North Fork land he’s reportedly acquired in recent years.

Hal Zwick of Town & County Real Estate confirmed that the property was in contract to be sold late last month, but declined to disclose the price of the pending sale. The property had been listed for nearly $3 million.

The Solovievs are planning to continue agriculture operations on the property, which was founded as a winery in 1979.

Though Mr. Soloviev already owns established vineyards on the East End, this is the first property that has a tasting room on site.

“It’s a really wonderful property,” Ms. Soloviev said, noting that she plans to reopen the tasting room, which has been vacant for several years.

“We want to make our own wines, we want to have a tasting room and keep the land as is — it’s beautiful,” she said.

Ms. Soloviev will oversee operations at both the winery and at Santa’s Christmas Tree Farm, which Mr. Soloviev purchased at auction earlier this year for $1.8 million.

Ms. Soloviev said her family’s first priority is to ready the Christmas Tree Farm for the season. “We have so many fun things planned,” she said, including hand-painted Christmas trains, sleighs and other activities for the Christmas-themed store.

Ms. Soloviev has been spending a lot of time preparing to move to the North Fork.

“We’ll be a big part of the community,” she said. “All of the children are working with us.”

A profile of Mr. Soloviev published Monday at Bloomberg.com, says he’s “installed his 17-year-old son Christian as the head of a smaller agricultural operation on 1,100 acres on the North Fork — land he said he may eventually use to build homes.”

To date, Mr. Soloviev has submitted just one application to subdivide a residential property in East Marion. That matter is currently before the Southold Town Planning Board.

Peconic Bay Winery was purchased by Paul and Ursula Lowerre in 1999.

The tasting room closed to the public in January 2013, and operations were transferred to the Empire State Cellars store at Tanger Outlets in Riverhead.

Later that year, the property was placed on the market.

Reflecting on their two decades of ownership, Mr. Lowerre expressed gratitude to the community.

“Ursula, my daughters and I have been privileged to work with some of the industry’s most creative talent, particularly Charlie Hargrave in the vineyards and Greg Gove in the winery,” Mr. Lowerre said Tuesday, noting that many former Peconic Bay Winery employees have continued their careers in the wine industry on the North Fork.

“We are proud of the wines we made and of our impact on the region’s visibility as a destination for high-end wine, food and entertainment experiences,” he said.

Mr. Lowerre said he’s pleased to be able to preserve the farmland by selling the land to Mr. Soloviev.

“[Mr. Soloviev’s] interest in agriculture will sustain the emphasis on farmland preservation in the region,” he said.

Properties Mr. Soloviev has acquired across the North Fork include the Davis Peach Farm on Hulse Landing Road in Wading River and planted vineyards formerly owned by the Damianos family, owners of Pindar and Duck Walk vineyards.

Mr. Soloviev did not respond to requests for comment on this story.